There are fly fishing pros, and there is fly fishing prose.  Then there's me.  I can't, with any honesty, count myself among the former, and on the latter my efforts often fail miserably.  I've tried waxing poetic in the past, fruitless efforts to find meaningful and profound literary parallels between fly fishing and the keys to success in the greater Cosmos.  I won't say that such efforts have been dishonest, but certainly grandiose and exaggerated on occasion.  Short of coming to the realization that I feel incredible joy - supplied, I'm firmly convinced, by a wonderful, magnificent God - when I'm slinging artificial bugs in a stream, I've somehow failed to magically unlock the secrets of life and the Universe through fly fishing.  There's still the matter of life, with all its frustrations and challenges, and fly fishing can't take those away.  Believe me, I've tried!  My hours on the water allow me to escape, to bring balance and perspective.  Nirvana, however, eludes me.  I'll keep searching, and I'll let you know when and if ultimate enlightenment arrives, and I'll let you know how I got there.  For now, forgive me if I take a more "nuts and bolts" approach.

I take heart in the knowledge that my obsession may be of great practical value to others of like-minded fanaticism for the cast, drift, and hook-set.  Hours of hands-on field research lead me to a conclusion that most all of you will find heartening:  The Poudre is fishing flat-out spectacular right now, right here in Bellvue/Laporte/Fort Collins.  I'd make every effort to strike while the iron is hot, however, because I'm not too confident of what lies ahead in the next couple of months. 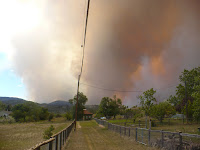 Obviously, the High Park fire has been the news here in NOCO for the month of June, and I'll confess to being slightly shook up about it.  Friends of mine have been on pins and needles, many of them evacuees wondering whether "home" is still there.  I got slightly concerned on one June morning when I snapped a photo of what I'll call "The Beast," which was lumbering eastward quickly enough to make me uncomfortable.  The view from the back alley was pretty ominous, to say the least.  Real-life heroes in the firefighting, law enforcement and public safety communities have done remarkable work to keep people in this community safe, and saved as many homes and structures as humanly possible.  They're all a source of inspiration and deserve a level of thanks that folks in NOCO can't possibly express.  Our gratitude is sincere, if inadequate.

In addition to the fire, this June has been an aberration in the normal cycle of fly fishing on the Poudre.  June normally brings a healthy run-off from the winter snowpack in the mountains.  From my casual observation, this year really had no run-off.  I've been comfortably fishing since March without any real high water, and at this rate I see the Poudre drying up pretty early.  I'll be pleasantly surprised if the fishing holds up throughout the summer and into early fall.  In the meantime, it's been hotter than a pistol!   In March, I was struggling to master the presentation of small midges and emergers to finicky trout, and had a measure of success, landing some beautifully-colored rainbows.  Seemingly overnight, and thanks largely, I suspect, to the warmest spring I can remember, fish began to feed rather indiscriminately on whatever I threw at them.  In late May, I stalked, hooked, and lost a beauty that had been actively feeding on the surface in a section of the Poudre in Bellevue that, for some reason, rarely sees much fishing pressure (at least not when I'm there).  Having suffered through countless drifts of BWOs and caddis in various sizes, I managed to fool the trout with a Royal Humpy, which he promptly spit back at me shortly thereafter.  I managed to land a slew of nice little browns, and one really nice rainbow, mainly on large stonefly patterns. 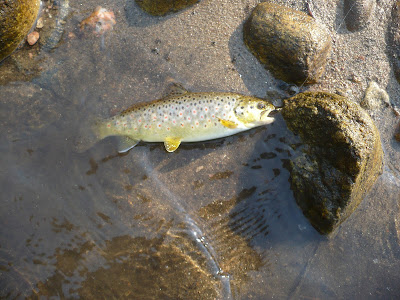 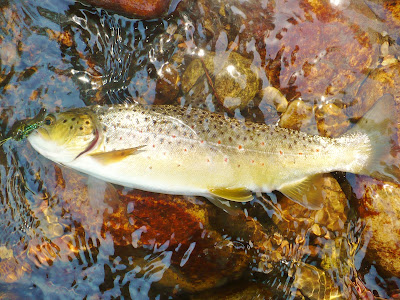 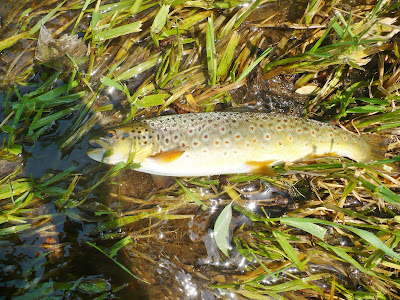 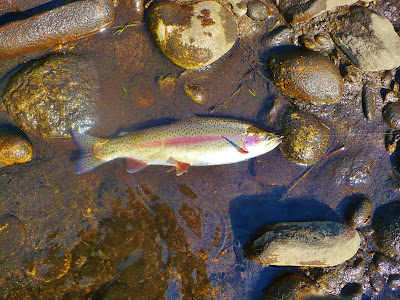 It's been so good that an April trout even rose to a hot pink strike indicator.  Now, I'm getting better at this sport, but I haven't yet figured out how to hold a trout on a piece of hot pink foam with no hook.  I've settled, instead, for throwing dozens of princes, pheasant tails, and large stoneflies, all of which have produced consistently. 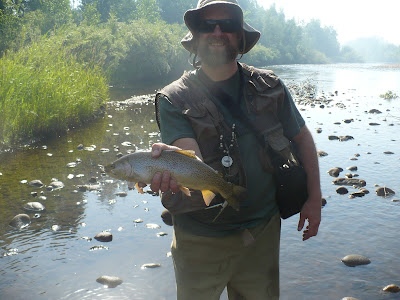 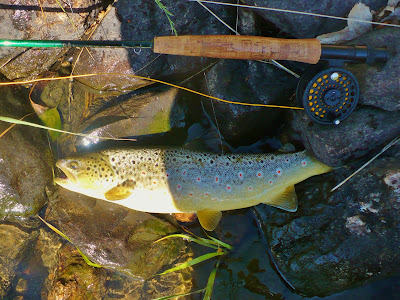 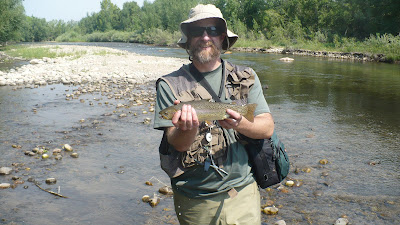 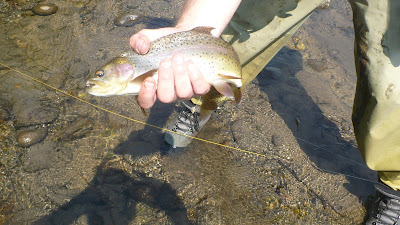 On the surface, consistent caddis hatches are in full swing, but I've had unusual success with hopper patterns, and quite frankly there has been no need for me to deviate much from a standard hopper/dropper combination.  My initial thought was that the hopper would merely serve as an indicator, and if a trout happened to develop a craving for a big, juicy meal, so much the better.  In early May, however, a stout cuttbow ignored a small brassie - the "hot fly of choice" at the time, I was told by a local fly shop - and absolutely slammed the hopper, engaging me in a battle that required a lengthy run downstream.  Shaped like a football, the cuttbow literally drug me through mud and silt before conceding.  Since then, it's been a matter of course to lead with a hopper pattern.  If you're into tying, I don't have the killer, end-all-be-all hopper pattern for you.  Just go grab some foam, rubber legs, hi-vis, deer hair, and get to it.  They've been nailing my ugly cutting room floor hoppers with regularity, especially in shallow, fast riffles (where they likely don't have much time to examine my "handiwork"). 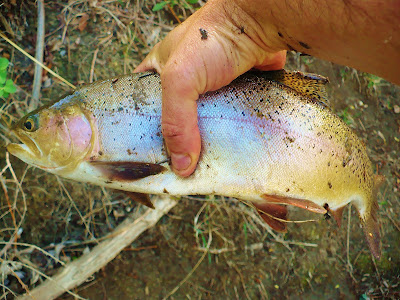 The final day of June launched me into a completely unprecedented dimension of giddiness.  Best day of fishing on the Poudre for me ever, hands down, as if every fly in my box had been drizzled with some magic elixir, leaving the trout helpless to resist.  I did a horrible job of memorializing the day-long slugfest, thanks to a moment of clumsiness that sent my camera dropping in slow motion into the river, a horrifying spectacle if ever there was one.  It eventually dried out and seems to be functioning again, but not in time to memorialize some absolutely gorgeous trout.  I managed a few, pre-clutz photos, mostly of Doc, but you'll just have to take me at my word (convenient, huh?). 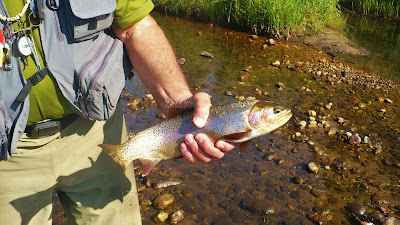 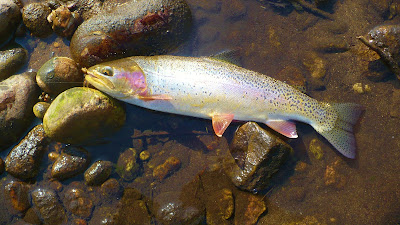 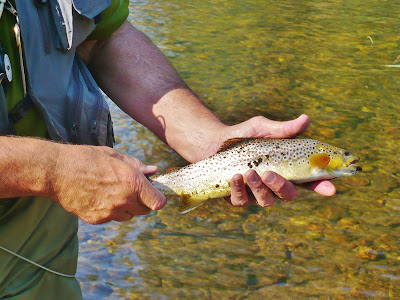 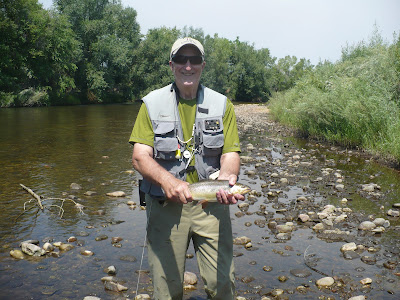 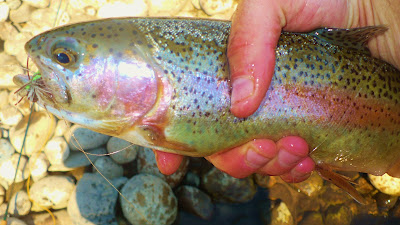 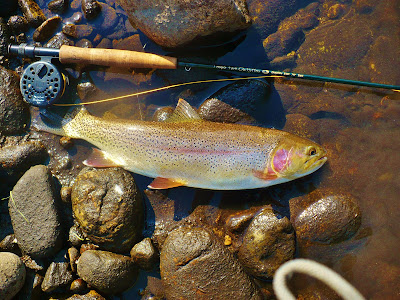 I don't know what the rest of the summer holds for us.  The water is well below its normal level for this time of year, and there's no telling how much of an impact an 85,000 acre wildfire will have on the water quality coming down the canyon.  But I can tell you that as of this moment in time, the Poudre is fishing just fine here in town.  Get out while the gettin's good!

Terrific post! Sorry for being a little late to reading it. Been pushed for time for a couple of weeks with family and the holidays. Would love to fish the Poudre in these areas and experience what you have written about!

Hey, thanks a lot Mel! The Poudre is now ashy sludge. All that rain last week shoved the burn into the river. Pretty much unfishable right now. Cross your fingers that the fish kill won't be as severe as expected.

Music You Can Cast To!

Gluttons for Punishment (aka my Kind Followers)